Ash Wednesday will be celebrated in a traditional Latin Mass at St. Stanislaus Church, New Haven on Wednesday, March 2, at 5:30 pm. The celebrant will be The Reverend Jan Pikulski.  Ashes will be blessed and imposed immediately before the Mass begins.

One of the most important liturgical days of the year, Ash Wednesday opens the season of Lent, which extends for forty days through Holy Saturday (the Sundays during Lent are not included). These forty days remember the fast of our Lord in desert before his passion and death on the cross.

In the Old Law, ashes were generally a symbolic expression of grief, mourning, or repentance.  In the Early Church, the use of ashes had a like signification and with sackcloth formed a part of liturgical rites of the year.  It was originally instituted for public penitents, but is now intended for all Christians, as Lent should be a time of penance for all.  The ashes used this day are obtained by burning palms of the previous year.  Traditionally, they a re blessed by four ancient prayers, sprinkled with holy water and incensed, and then placed in the form of a cross on the foreheads of each of the faithful with the words, “Remember, man, that thou art dust, and unto dust thou shalt return.”  The ancient prayers of the blessing suggest suitable thoughts for the opening of Lent. They are summarized here:

“Almighty and everlasting God, spare the penitent … bless these ashes, that they maty be a remedy to all who invoke Thy Name … O God, who desirest not the death but the conversion of sinners, look in kindness upon our human frailty … and bless those ashes, so that we, who know ourselves to be but ashes … and that we must return to dust, may deserve to obtain pardon and the rewards offered to the penitent.” This homily was given at the Benedictine Monastery of Saint Benedict, France, by the prior, Dom Alcuin.

+ Historically, the season of Lent has begun at different times in different places for different categories of people. Clergy were once expected to begin the great fast earlier than laity (monks, presumably, were held to be fasting anyway). In Milan, the papal ‘innovation’ of Ash Wednesday, introduced to ensure a full forty day fast (excepting Sundays) never took root and is not observed there to this day. Accordingly, Septuagesima, an enrichment of the Roman rite with Eastern origins, served as the beginning of the great fast for some. In due course it became more generally appreciated as a pre-Lent, serving to underline and prepare for the vital observance of Lent, which commences but a little over two weeks afterwards.

The importance of Septuagesima in the Church’s liturgical tradition can be gauged by the strength of the Epistle and Gospel of this Holy Mass: St Paul exhorts us to run the race so as to win the victory, the imperishable crown of everlasting life; the owner of the vineyard rebukes us with the question “Why do you stand here idle all day?”, exhorting us to get to work even be it very late in the day. So too, the Introit, Gradual, Tract and Communion antiphon leave us in no doubt that we are engaged in a battle, one in which we may turn to the Lord for the strength to endure unto victory so that, in the words of the Offertory, we may sing praise to the name of the Almighty.

Running a race requires endurance and strength, even more so when the race concerned is a marathon, and exponentially more so when the race is in fact perseverance in fidelity to Christ and His Church until the end in a world and, sometimes seemingly, even a Church, which can be inimical to the very need to seek the victory. It is very easy to halt, to stand idle and indulge in all manner of distractions. The temptation to go backwards or to take another path is always present. Our fervour can be lost and the energy with which we began easily dissipates when we do not keep our focus on the finishing line and the prize it offers. St Benedict exhorts his monks neither to tire nor to run away (Rule, ch.7) if they would be saved. St Paul, as we have heard, urges us on to complete the course we have begun.

Nevertheless, it is indeed all too easy to grind to a halt and to stand idle. Unforeseen circumstances can pause my progress; I can suffer injuries along the way that render me incapable of proceeding further; the living of my God-given vocation can be blocked by my own sloth and indecision, or by the fear of others who look to themselves and to their own prospects, rather than to God, to know what is right.

Idleness remains idleness, however, whether it is chosen and indulged in or whether it is somehow involuntary. And as St Benedict teaches clearly and succinctly: “Idleness is the enemy of the soul.” (Rule, ch. 48). He prescribes a regime of manual labour and study as the antidote—a regime which has yielded singular fruit wherever the Rule of the Father of Western monasticism has been faithfully lived in the centuries since.

– In ourselves, by clearing away the obstacles, real or imagined, that prevent us from moving forward, from being ready to take on the burden of the day. We may need help with this, both human and divine. But if we do not humbly seek the help we need, the obstacles will remain. God’s grace is available, but I must make the effort to begin to clear all that blocks my fuller reception of it, and which renders me idle.

– For the owner of the vineyard, indeed for the Lord Himself, for He has work for me to do that only I can do and which shall remain undone if I do not do it. It is very hard to see this when I am sinking further and further into idle depression, but it is a fact. Each one of us is called to serve Him in love and fidelity in our different vocations and circumstances, and in persevering in so doing we shall give Him Glory and bear fruit in ways in which He alone can foresee. This is God’s work in us, of course, but we must play our part. We must finish the race. We must get to work before the day is over.

The violet of Septuagesima thus exhorts to wake from our complacency. Yes, it reminds us that Lent is on its way, and rightly do we now prepare to ensure that its discipline is real and its fruit substantial. But idleness cannot be tolerated a moment longer. There is work to do now, in us and by us. For the grace to delay no longer in doing what is necessary, let us beg Almighty God at His altar in this Holy Mass. + 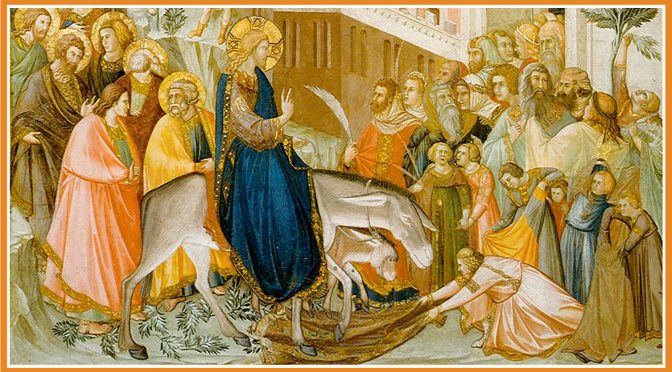 Palm Sunday will be celebrated in the Blessing of Palms, Procession and High Mass at St. Stanislaus Church, State Street at Eld Street, in New Haven on March 28, at 2:00 pm. The celebrant will be the Father Richard G. Cipolla, Pastor Emeritus of St. Mary’s Church, Norwalk.

In the liturgy of Palm Sunday, the two-fold point of view from which the Church regards the Cross is expressed in two ceremonies, one marked by joy and the other by sadness. First comes the Blessing and Procession of Palms, in which everything overflows with a holy joy, enabling us after twenty centuries to revive the spirit of the magnificent scene of our Lord’s triumphal entry into Jerusalem. Then follows the Mass with its chants and lessons relating exclusively to the sorrowful memory of our Redeemer’s Passion.

Music for the service performed by members of the Schola Cantorum of the St. Gregory Society, will include the proper Gregorian chants for the the Blessing of Palms, Procession and Mass, the Missa ‘Orbis Factor’ ordinary (Vatican ed. XI), the motet “Adoramus te, Christe” by William Byrd, and the plainsong hymn, “Vexilla Regis prodeunt.” 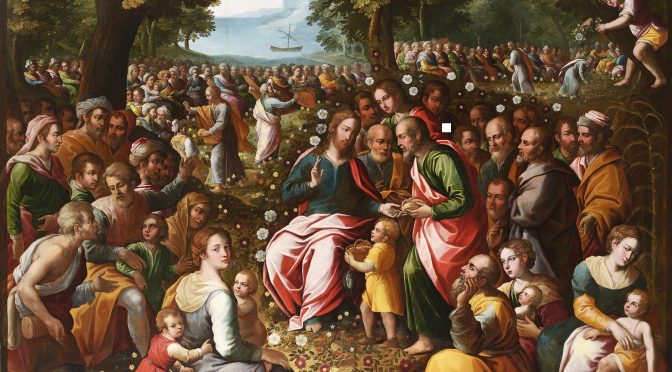 The Low Mass will be offered at St Stanislaus Church, New Haven, at 5:30 p.m.