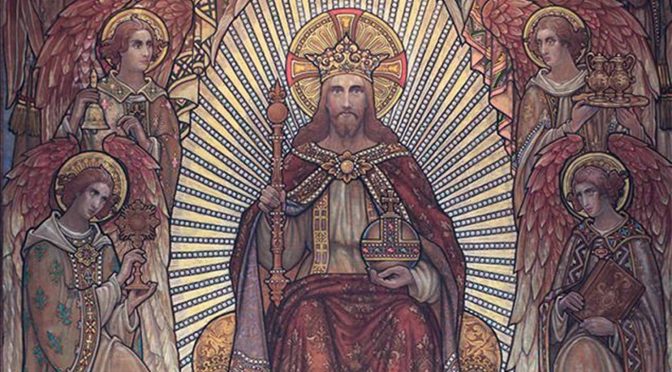 Dom Alcuin of the Monastery of St Benedict (France) preached this homily for the Feast of Christ the King this past Sunday. It is offered here for our continued reflection and for our formation in the faith.

+ History shows that the world has over the centuries suffered very bad kings, has enjoyed good kings, has seen and forgotten many unmemorable kings, and has at times rejoiced in wise and saintly kings. Kings have been just and unjust; some have striven for and presided over periods of great peace and prosperity, others have wrought conflict and war in vain attempts to add to their power and glory. Today kings are a somewhat rarer species, often kept in a gilt constitutional cage which serves to constrain the excesses to which they have all too often seemed to be prone.

Into this world of kingly power, the King of the Jews, Our Lord Jesus Christ, was born—an event which itself prompted the slaughter of innocent children on the orders of a paranoid king. (cf. Mt 2:12-13) A similar anxiety is expressed by Pilate in the Gospel of this Holy Mass: he insists on knowing whether Our Lord identifies Himself as a king, for it would be easy, if He did, for Pilate to know how to deal with Him in terms of the politics of power.

But “my kingdom is not of this world” Our Lord says to Pilate. The dialogue that follows is instructive:

Pilate said to him, “So you are a king?” Jesus answered, “You say that I am a king. For this I was born, and for this I have come into the world, to bear witness to the truth. Everyone who is of the truth hears my voice.”

Poor Pilate is surely bewildered by this. But his attempt to deal with this problematic ‘King of the Jews’ elicits a singularly important statement by Our Lord: “I have come into the world, to bear witness to the truth.”

Pilate’s famous retort (which is recorded in the verse of St John’s Gospel that immediately follows today’s Gospel reading) might also be ours: “What is truth?” he exclaims. But it is a good question. No—it is the only question. For upon it hang no less than … everything.
Under Pilate’s question lies buried the question of our age: “Is there such a thing as truth?” For we live in a world where “my truth” and “your truth”—even if they are radically contradictory and may even have dire consequences—are sacred idols to be worshipped under pain of social ostracism, or worse, at the altar of the god of relativism, whose only doctrine is the perverse dogma that there can be no doctrine, that is, that there can be no objective truth.

Our crucified and resurrected Lord throws down this altar: “I am the way, the truth and the life,” (Jn 14:6) He proclaims through His Church down the ages. “I have come into the world, to bear witness to the truth,” He insists this morning.

If we recognise His revelation in history of the truth that there is life beyond death, we have already begun to arrive at an answer to Pilate’s question. And if we ponder this morning’s Gospel a little further, we can begin to appreciate that the answer to this question is not a concept or an idea, but a person—the very person who stood before Pilate. “For this I was born, and for this I have come into the world, to bear witness to the truth. Everyone who is of the truth hears my voice,” Our Lord said. Christ’s kingdom is, therefore, a kingdom of truth. Christ is the King of Truth. Christ is Truth incarnate. This, and nothing less, is what we celebrate in today’s feast!

Thus, when we speak about the social kingship of Christ, or about working to bring about the Kingdom of God on earth, we are advocating nothing other than the reign of Truth Himself, and of the truths He has revealed as necessary for salvation, in each and every aspect of human life and society. Today’s feast demands that we work assiduously to achieve this. Christ, the King, gives each of us this mission.

We may well be daunted in the face of this God-given duty. The world is relativistic. Unbelief and false religions abound. More and more governments oppose themselves to the Truth and persecute those who stand for His teaching: “They will lay their hands on you and persecute you, delivering you up to the synagogues and prisons, and you will be brought before kings and governors for my name’s sake,” (Lk 21:12) Our Lord warned us.

Be that as it may, I must hold to His teaching, faithfully handed on to us in the Tradition of the Church. It is not negotiable – not even when the Church’s own ministers obfuscate it or fail in their duty to hand it on pure and intact. Even though I may not be able to influence great numbers, my perseverance to convert and conform myself to all that the Truth of Christ demands of me today, and tomorrow, bears a unique witness to its life-giving reality which shall bear fruit in ways which I may never foresee. This is the primary mission given to me by Christ the King.

Christ the King lives and reigns, having won the definitive victory over sin and death for us all. For the grace of perseverance in living in and from the Truth Himself, let us pray fervently in this Holy Mass. +