Beginning today, we need to make  the petition to the Holy Spirit through a Novena asking that the Holy Spirit to bestow onus His seven gifts and the twelve fruits. The seven gifts of the Spirit: “wisdom, understanding, counsel, fortitude, knowledge, piety, and fear of the Lord. They belong in their fullness to Christ, Son of David” (Catechism, 1831).

And, “The [12] fruits of the Spirit are perfections that the Holy Spirit forms in us as the first fruits of eternal glory. The tradition of the Church lists twelve of them: ‘charity, joy, peace, patience, kindness, goodness, generosity, gentleness, faithfulness, modesty, self-control, chastity’” (Catechism, 1832).

ACT OF CONSECRATION TO THE HOLY SPIRIT

On my knees before the great multitude of heavenly witnesses I offer myself, soul and body, to You, Eternal Spirit of God. I adore the brightness of Your purity, the unerring keenness of Your justice and the might of Your love. You are the Strength and Light of my soul. In You I live and move and am. I desire never to grieve You by unfaithfulness to grace and I pray with all my heart to be kept from the smallest sin against You. Mercifully guard my every thought and grant that I may always watch for Your light and listen to Your voice and follow Your gracious inspirations. I cling to You and give myself to You and ask You by Your compassion to watch over me in my weakness. Holding the pierced Feet of Jesus and looking at His Five Wounds and trusting in His Precious Blood and adoring his opened Side and stricken Heart, I implore You, Adorable Spirit, Helper of my infirmity, so to keep me in Your grace that I may never sin against You. Give me grace, O Holy Ghost, Spirit of the Father and the Son to say to You always and everywhere, “Speak, Lord, for Your servant hearth.” Amen.

PRAYER FOR THE SEVEN GIFTS OF THE HOLY SPIRIT

Christ Jesus, before ascending into heaven, You promised to send the Holy Spirit to Your apostles and disciples.

Grant that the same Spirit may perfect in our lives the work of Your grace and love.

Grant us the Spirit of Fear Of The Lord that we may be filled with a loving reverence toward You.

the Spirit of Piety that we may find peace and fulfillment in the service of God while serving others;

the Spirit of Fortitude that we may bear our cross with You and, with courage, overcome the obstacles that interfere with our salvation;

the Spirit of Knowledge that we may know You and know ourselves and grow in holiness;

the Spirit of Understanding to enlighten our minds with the light of Your truth;

the Spirit of Counsel that we may choose the surest way of doing Your will, seeking first the Kingdom;

Grant us the Spirit of Wisdom that we may aspire to the things that last forever; Teach us to be Your faithful disciples and animate us in every way with Your Spirit.  Amen. Consider a reflection on the Ascension of the Lord from St. Augustine: 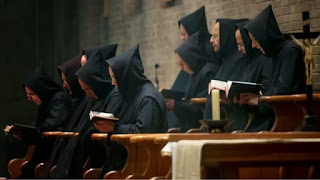 (Paris) In October 2013, the re-colonization of the Benedictine Abbey of Wisques by the old Rite Benedictine monks of Fontgombault has taken place. After a transitional period, Wisques became an independent abbey again. Last Sunday a new abbot was elected.

After the clear-cutting of the French Revolution  Benedictine monastic life slowly returned to France. The Abbey of St. Paul of Wisques was founded in 1889. The monks were expelled in 1901 by anti-Catholic laws yet again and found refuge in the Netherlands. In 1920 they managed to return.
Wisques followed the liturgical reform in 1970 and introduced the new rite. The youth did not materialize. Although in 2009 there were still 14 monks in the monastery,  the “youngest” was already 72 years old. For 25 years no novice had come. The community could therefore choose no more abbots. The Abbot of Solesmes appointed an administrator. Thus began the search for a solution that was found in Fontgombault.

The new rite led to the end of the Abbey – The old Rite makes  it new
With the approval of Bishop Jean-Paul Jaeger of Arras, the abandoned convent was transferred to the old Rite Benedictine monastery of Our Lady of Fontgombault. This had not implemented the liturgical reform of the late 60s and enjoys numerous vocations.
Early in 2013 the first monks came from Fontgombault to Wisques. They held to the traditional rite and the old Divine Office. The experience has been very positive. Since October 2013, the old Rite convent has 18 monks. Since that moment,  Wisques is suffragan of the the Abbey of Fontgombault. Their abbot, Dom Jean Pateau, was also administrator of Wisques.
After a transition period an abbatial election had taken place on Sunday, April 3. Dom Philippe de Montauzan, the sixth abbot of Wisques and first since the old ritual repopulation. He has held the position of Prior since 2013. De Montauzan was previously novice master of the Abbey Fontgombault. The repopulation of Wisques took place under his leadership.
The blessing of the new abbot will be held this coming June 4th.
Wisques is located in the extreme north-east of France near the Belgian border. The Dutch town name is Wizeke (place of Wico). The area belonged in the 18th century to the German or Dutch-speaking area. The French-Dutch language border is still barely ten kilometers east of Wisques.
Text: Giuseppe Nardi
Image: Grafica.Kulo / Abbaye Saint-Paul Wisque
Trans: Tancred vekron99@hotmail.com
AMDG

The Church’s Feasts and Devotions for the Month of April. We change the praying of the daily praying of the Angelus to the Regina Caeli for the 50 days of Easter. (That is, from Easter Day through Pentecost Sunday). Please add this prayer, in Latin and English, to your iPhone.

Let us pray. O God, who gave joy to the world through the resurrection of Thy Son, our Lord Jesus Christ, grant we beseech Thee, that through the intercession of the Virgin Mary, His Mother, we may obtain the joys of everlasting life. Through the same Christ our Lord. Amen.